skip to main | skip to sidebar

I recently got an email from teacher named Byron Banks from Ridge Middle School in Mentor, Ohio. His 7th and 8th graders had been using SketchUp for a couple of weeks, the 8th graders working on architectural models, and the 7th graders designing robots.

He sent me a compilation of some of the robot designs, using Flowboard for iPad, All of them are really fun, and here are some of my favorites:

Now all they need to do is get a 3D printer and make these things real!

Check out all of the designs here.

Posted by Bonnie Roskes at 10:18 PM No comments: Links to this post

What's Coming in Our October Projects? (How About a Little Minecraft?)

I had a booth last week at a local Maker Faire, where one of the SketchUp models I had on-screen contained Minecraft blocks. So for five hours, I heard "MINECRAFT!!!!" followed by a stampede of small feet toward one of our laptops, and a request to learn how to build something. Exhausting, but fun.

When I explained that SketchUp only makes "stand-still" models, you can't actually play with the blocks like you do in Minecraft itself, I thought the kids might get discouraged. Not so. They sat quietly assembling blocks into houses, fortresses, towers, and more, and usually got up reluctantly when their parents told them it was time to move on (and to give a turn to the kids lining up!)

So I thought I'd try a Minecraft project this month, as well as a timely pumpkin model, for our Projects of the Month subscribers.

This project actually has two parts: setup and build. The first project describes how to take an existing model of blocks from the 3D Warehouse and set it up so that you can easily use the blocks in future models. The second part shows how to use your setup starter model to make a house with windows, a roof, grass, and even a pool, using different kinds of blocks. 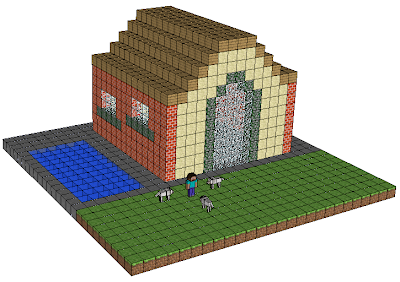 Just in time for Halloween, you can make your own 3D pumpkin. This project shows one technique of organic models - building a model in small steps that, put together, result in a smooth and natural-looking object.

If your kids (or you!) are Minecraft fans, this is a set of projects you don't want to miss! Still just $24.95 for a year, sign up for our Projects of the Month.

Bonnie Roskes
My goal is to get everyone to think, visualize, and create in 3D. You're never too old or too young - my materials are great for kids as young as 8, and for design pros throughout their careers. I live in DC with my wonderful family.