skip to main | skip to sidebar

MasterSketchUp's "SketchUp to LayOut," Updated for 2014

I first wrote about my friend Matt Donley (aka "MasterSketchUp") several months ago, when he first published his SketchUp to LayOut e-book.

Matt's MasterSketchUp site is mainly a blog with a wealth of modeling tips and tricks. (His latest offering, for example, focuses on how you can approximate an AutoCAD XREF in SketchUp. No, you can't link an external object that will update automatically, but SketchUp has a "Reload" feature - the next best thing.) He also provides links to some nice (and free!) videos and tutorials.

There are three packages on offer, which you can view at the very bottom of the SketchUp to LayOut page:
If you're wondering why I'm plugging Matt's materials when I have a soon-to-be-updated LayOut book of my own, there are two reasons. Matt's book and videos focus on tips and tricks and best practices, whereas my book contains start-to-finish, hands-on exercises. The second reason - I'm an affiliate reseller of Matt's materials!

So please click on over to SketchUp to LayOut and check out what Matt's got!

Posted by Bonnie Roskes at 4:23 PM No comments: Links to this post

I never thought I'd write a post with THAT title. But I recently received a lovely package from mathematician and artist Cye Waldman (whom I blogged about before) who's a fan of our GeomeTricks books.

The package contained two sets of beautiful and sturdy cards with a variety of geometric patterns on them. The cards are really striking, printed on black cardstock (the insides are white), and come with matching black envelopes.


Here's one set of 7 cards, based mostly on patterns of triangles and hexagons. 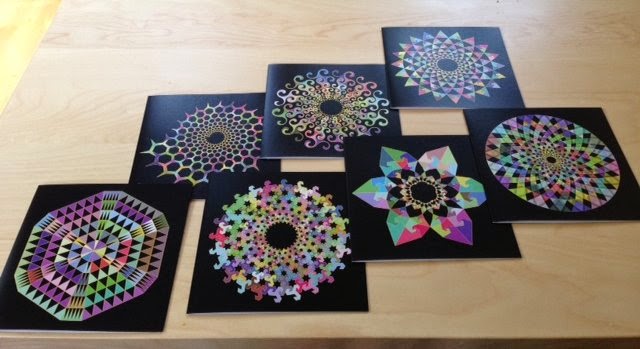 On the back of each card is a pattern name and explanation of how the tessellation was made. 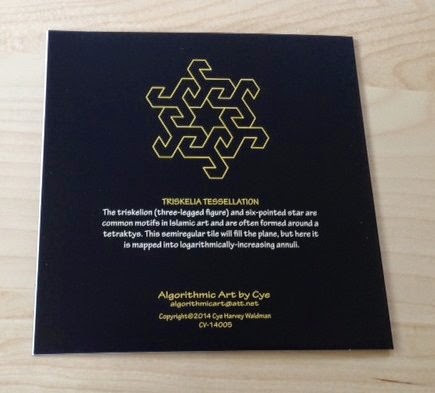 This one is my favorite, called "Medusa." It's created from triskelion (three-legged figure, who knew?) logarithmic spirals. 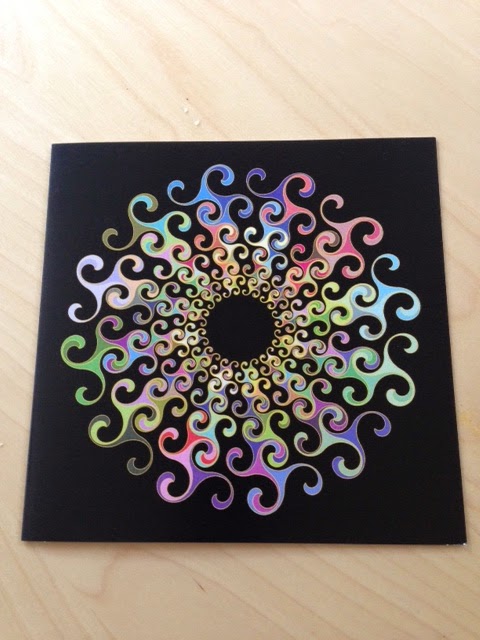 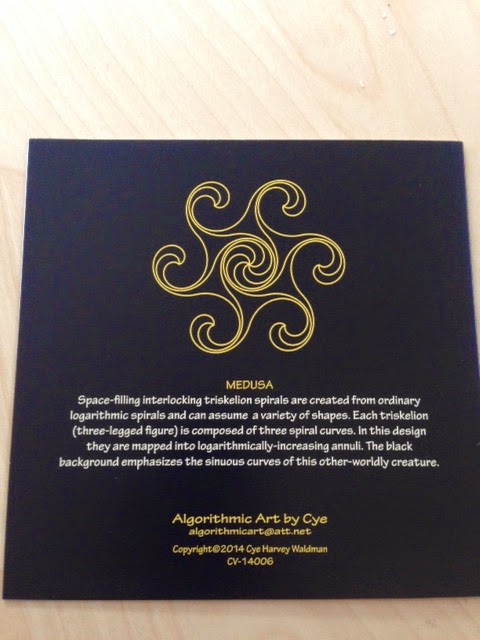 The second set of cards features patterns made of hearts. Great for Valentines Day (if you're thinking about that holiday in June). 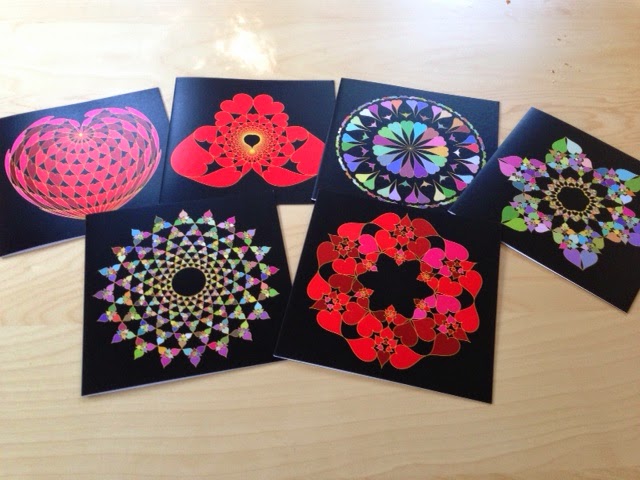 Cye exhibits his geometric work at the "Off Track Gallery" at the San Dieguito Art Guild in Encinitas, California. Here's his dedicated page.

If you want info on these cards, email Cye at algorithmicart@att.net. They'd make a nice end-of school gift for a math teacher.

Posted by Bonnie Roskes at 9:32 PM No comments: Links to this post

There are so many applications out there that create photorealistic renderings of SketchUp models; it's nearly impossible to know them all. And these apps can vary greatly in price as well as learning curve.

I was asked recently to review a very simple renderer for SketchUp called Visualizer, which is a neat little program. I used the free trial version, but the paid version is only $19.99, the least expensive renderer I've seen. And the photo area works right inside SketchUp, in real time.

Here's the first example I tried - a SketchUp model of a simple set of toy blocks I downloaded from the 3D Warehouse. As always, the model has a cartoon-like feel in SketchUp, even with edges turned off. 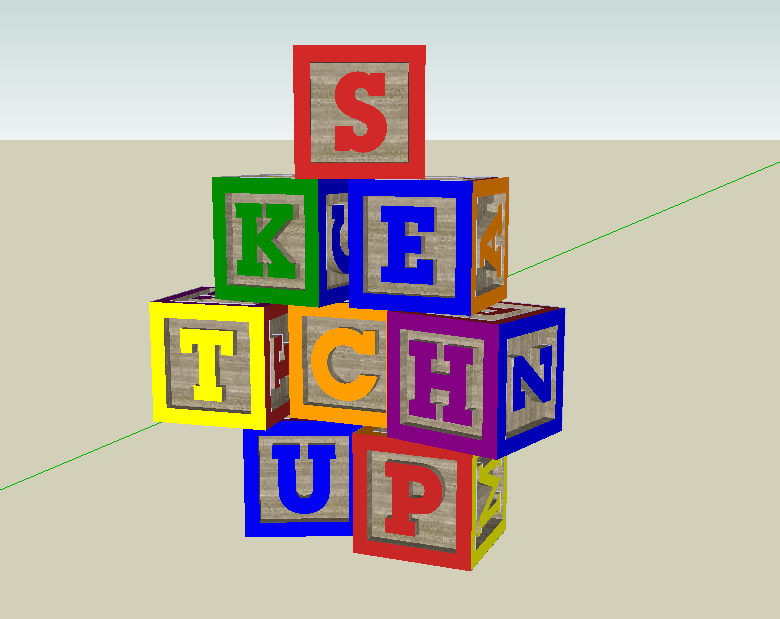 After you install Visualizer, you should see its icon right there in SketchUp:

Click the icon, and the photo area appears right on top of the SketchUp window. (The Visualizer actually appears above ALL windows, until you minimize it.) This simple model took only a few seconds to cycle through the levels of pixelation and the result is pretty sharp - the rendering does indeed have a rather  photo-like feel. 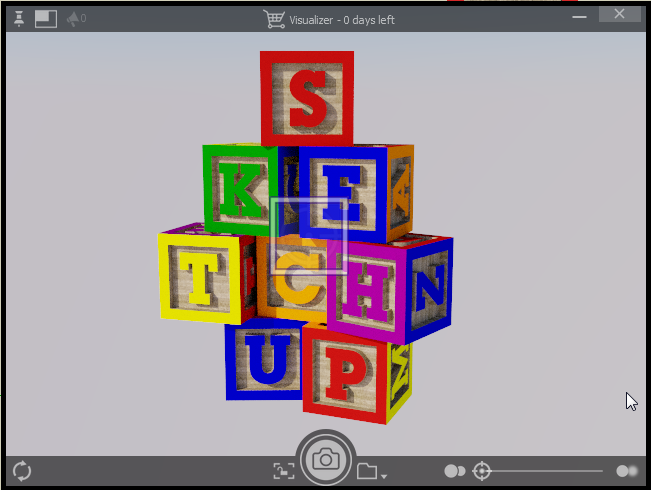 You can change the view in SketchUp and the rendering will update as well. Though for a complex or heavy model the rendering takes time, so there is an option to lock the image until you're ready to "take the photo." To save a rendering, you just click the large shutter icon at the bottom center.

Here's the next one I tried, a house with trees. 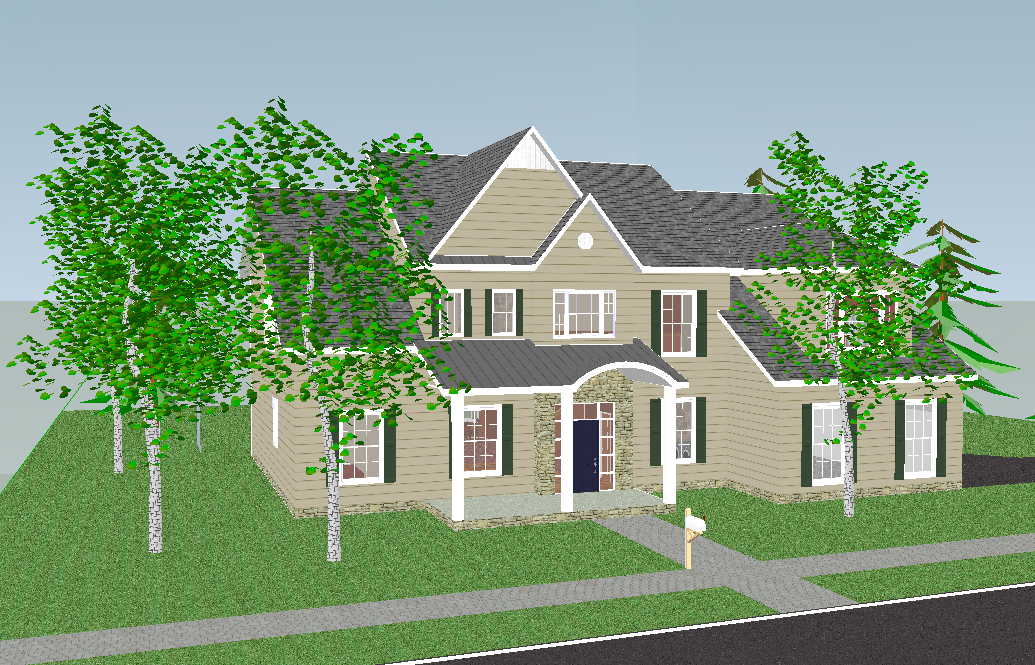 And here's the render, which took about two 2 minutes. It's hard to see in this image, but there is still some grainy pixelation, particularly in the shadowy areas, but for a presentation this makes a lovely image, complete with realistic-looking shadows. 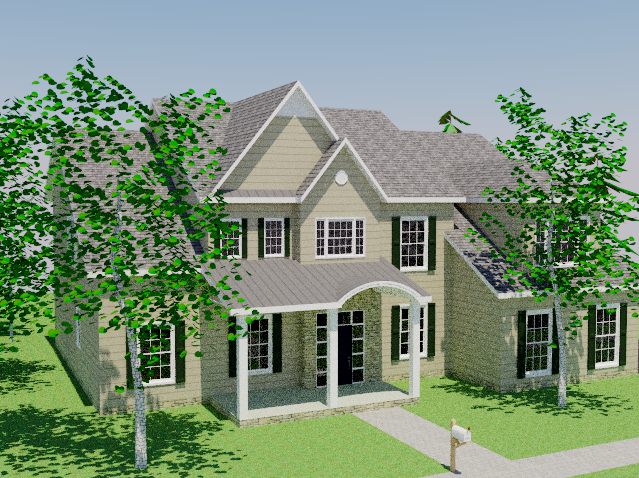 The shadows are controlled by SketchUp's Shadow Settings window (Window / Shadows), where you can set the time of year and day. The image above is mid-day, full sun, and I wanted to try a darker time, like a winter afternoon. 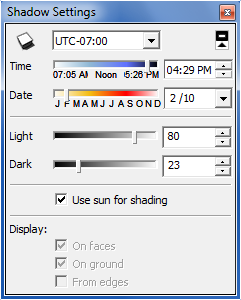 Here's the image this time. The sky still looks light, but the shadows are time-appropriate. (I tried going later in the day and into the night but those results were a little strange - the sky turned yellow and then dark blue.) 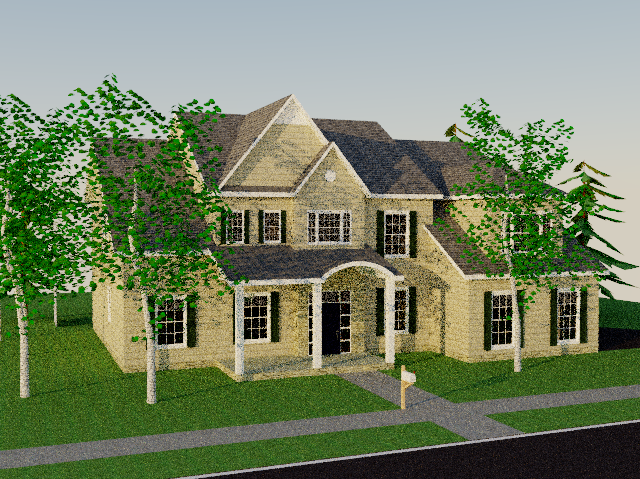 Another nice feature is focus. At the lower right is a slider to control the background blur, and the "bulls-eye" icon on the picture itself sets the center of focus. So I was able to focus on the front door while leaving the farther parts of the house, including the trees, a bit blurry. 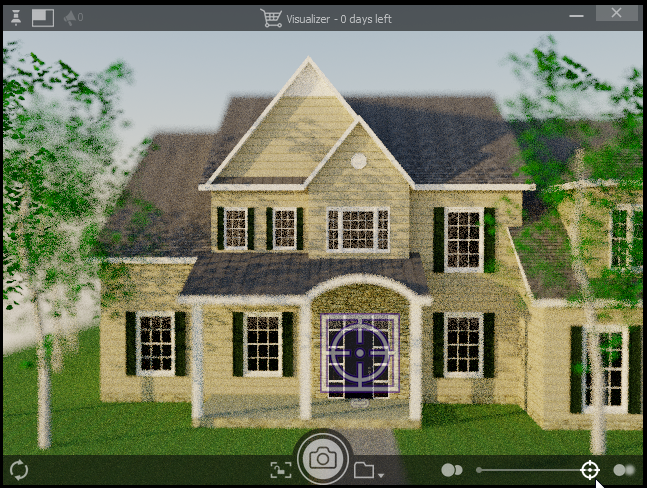 So if you're looking for an easy to use rendering application that won't set you back and cost hours of training, Visualizer is a good one to try!


Anyone can design anything in 3D! http://www.3dvinci.net/

Posted by Bonnie Roskes at 4:51 PM No comments: Links to this post

Bonnie Roskes
My goal is to get everyone to think, visualize, and create in 3D. You're never too old or too young - my materials are great for kids as young as 8, and for design pros throughout their careers. I live in DC with my wonderful family.